That is according to Alan Siegel, author of a disturbing website aptly entitled “Starts with a Bang.” He subtitles his piece with:

“We might live in a quantum Universe, but we’ll violate the principle of relativity if space is discrete.”

This quote is revealing—sort of like an unconscious admission of guilt. As shown in my recent book “Religious Roots of Relativity,” Einstein’s erroneous assumption that space is perfectly empty is the religious foundation of relativity. All creation theories, including the Big Bang Theory, start with that assumption. Religious folks, including Einstein and his regressive followers, cannot imagine the universe always existed and that there never was, nor ever will be, perfectly empty space. Einstein needed that idealistic ad hoc to assume light particles underwent perpetual motion. Otherwise, they would lose velocity over distance as they collided with other particles in the environment. Without that assumption, the cosmological redshift would have to be considered a simple tired light effect: what happens to everything and every motion traveling from one place to another in the universe. Today’s regressive physicists, of course, must hold fast to Einstein’s ridiculous Untired Light Theory despite their otherwise familiarity with the Second Law of Thermodynamics. That law is what leads to the forthright rejection of claims of perpetual motion that might reach the patent office. The younger Einstein would have thrown out his own claim when he worked at the office in Bern.

“Going to smaller and smaller distance scales reveals more fundamental views of nature, which means if we can understand and describe the smallest scales, we can build our way to an understanding of the largest ones. We do not know whether there is a lower limit to how small ‘chunks of space’ can be.”

Per infinity, we assume the universe to be infinitely subdividable—there is no limit to how small those “chunks of space” can be. There is no undividable fundamental particle. There can be no “continuous space,” which, by the way, is required for Einstein’s equally ridiculous immaterial field theory. All this is why quantum mechanics and relativity can never be reconciled. The bits of matter recognized by quantum mechanics destroy the perfectly empty space imagined by cosmogonists and regressives alike. 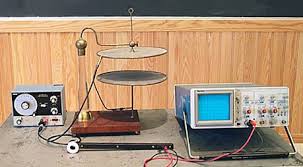